Selected videos; participatory installation and live intervention I'm Thinking of You (2009); and preview presentation of the film Because of Love (rough cut, 2016), directed by Nathaniel Walters. 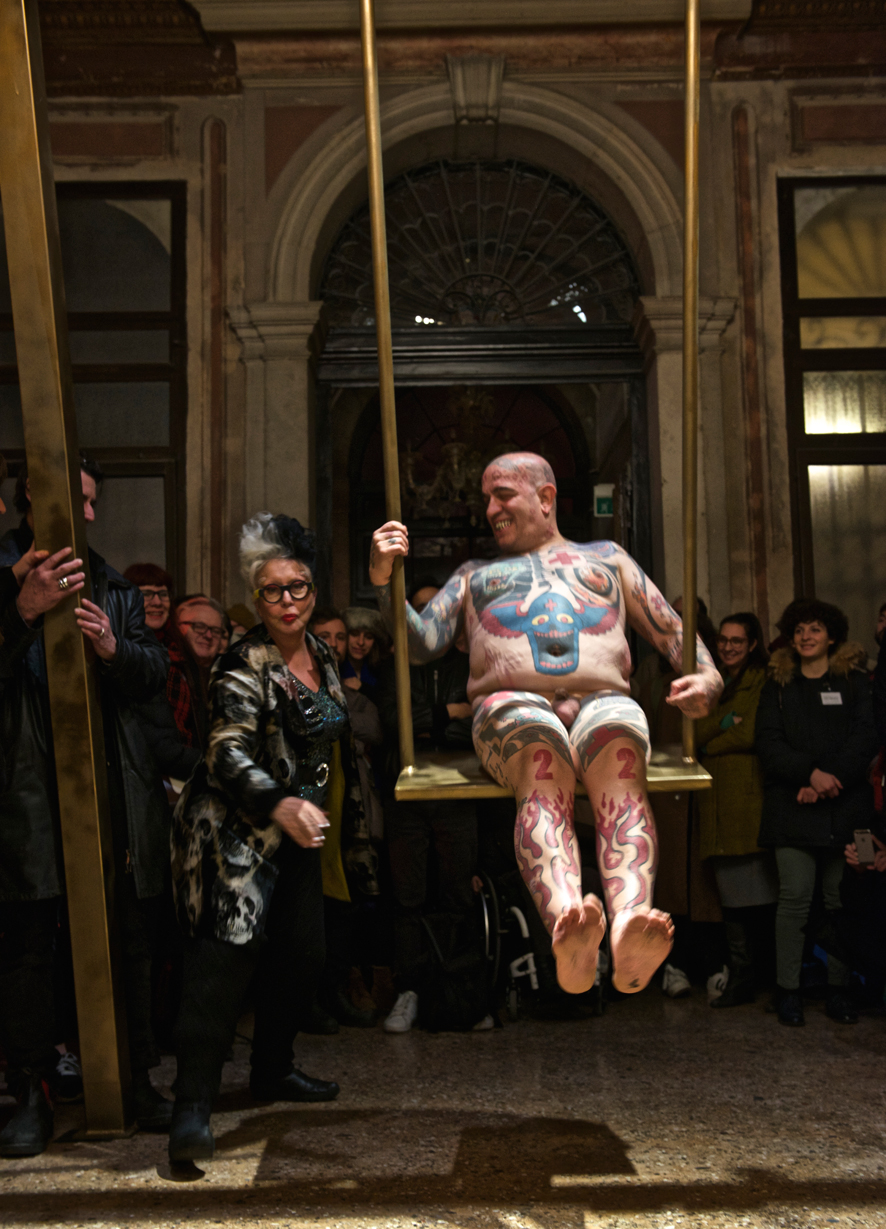 Franko B, I'm Thinking of You. Performance at the III Venice International Performance Art Week 2016. Franko B pushed on his golden swing by ORLAN. Image © Edward Smith 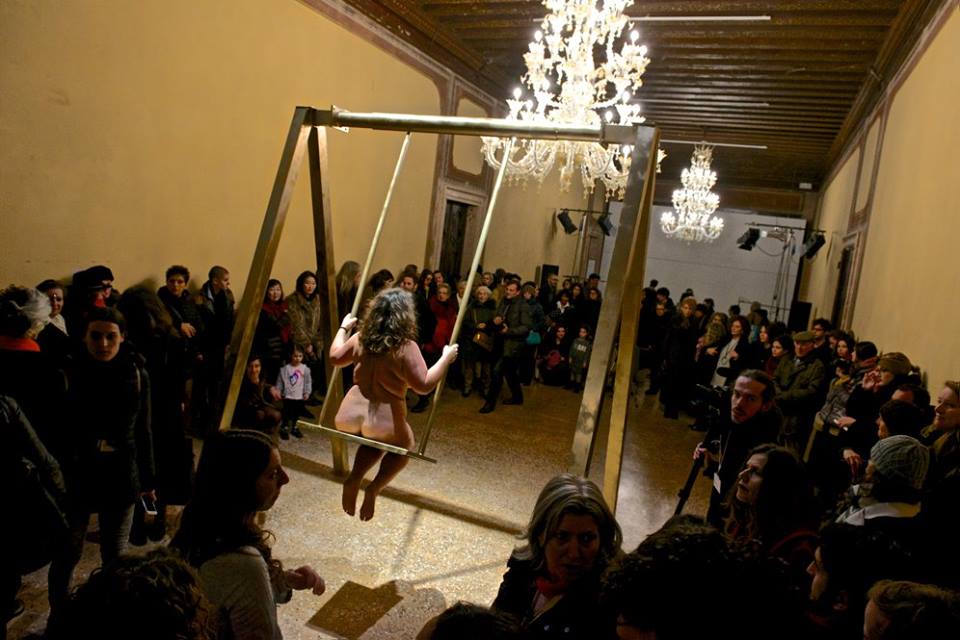 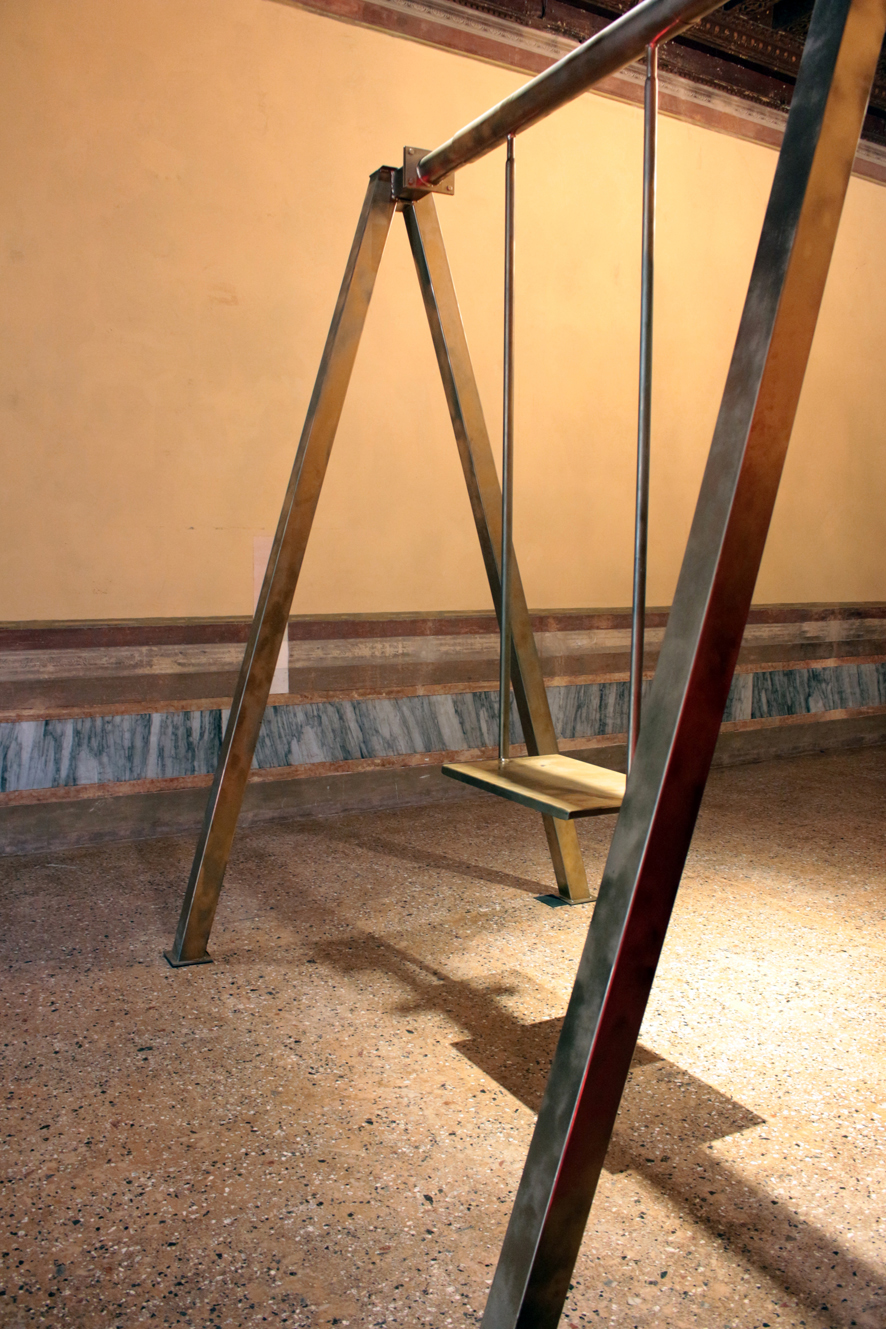 Franko B. Exhibition view of the performance sculpture I'm Thinking of You (2009/2016) at the III Venice International Performance Art Week 2016. Photograph by VestAndPage

Franko B (born 1960 in Milan, IT) is an Italian artist based in London, making drawing, installations, sculptures and performances. Over the years he has built up a sizeable body of work and has become internationally known. He is an artist who doesn't separate life from practice, with his work situated somewhere between isolation and seduction, benevolence and confrontation, suffering and eroticism, punk and poetry. His concern is to make the unbearable bearable, and provoke the viewer to reconsider his own understanding of beauty and of suffering. He uses his body as a metaphor for social struggle, and embodying notions of the personal, political and poetic. Projecting the confluence of love and pain, Franko B demonstrates that humanity, as a condition, can be reformed. At present he is an associated visual arts lecturer at Northampton University, UK, and a visiting lecturer at the Royal Collage of Art, London, UK.

At the VENICE INTERNATIONAL PERFORMANCE ART WEEK 2016, Franko B presents the participatory sculpture and live performance I'm Thinking of You (2009), with music composed and originally performed by Helen Ottoway (2009-2012). The work presents a surreal, dreamlike image... a romantic vision of childhood fantasy and abandon. The body is central, but we are also presented with objects and music, which converge to take the viewer through a contemplative, personal experience. The first inspiration for I'm Thinking of You came from a childhood object, which Franko B made into a sculpture, altered for safe use by adults. The idea was to allow adults to play, to forget their problems, to let go, or just to have fun - in the same way that children are allowed to. Over time, and with engagement with the composer, Helen Ottaway, the idea has developed and changed, with Franko using performance and music as a means to create his desired image.

Further a work overview in selected videos of the artist's archive and a preview presentation by Franko of the film Because of Love (rough cut, 2016), directed by Nathaniel Walters.