In the framework of the Educational Learning Program of the VENICE INTERNATIONAL PERFORMANCE ART WEEK, Studio Contemporaneo in collaboration with Live Arts Cultures and Francesca Carol Rolla presented the fourth of a series of practical workshops on performance art in Venice: 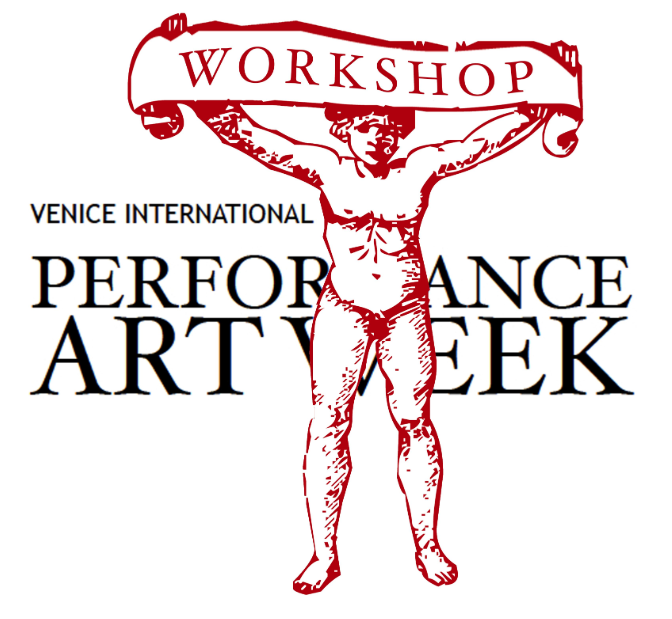 On our world’s stage, where economic and social systems move deeply into relations of the capital, La Pocha Nostra's and VestAndPage's generous theory and practice stress the complexity of being human – the pleasures and the pains. Before knowing you I was wondering what motivates artists to give, to share initiatory processes. To me, you have been the experience that embodies what art can do: assigning sacred tasks to the human imaginary, you showed me that I might be able to live my life as a work of art. I understand that efforts are required, as well as sacrifice – but everybody has his part on the stage. – Francesca Carol Rolla, 2017

The performance troupe La Pocha Nostra (US/Mexico) and artist duo VestAndPage have chosen to merge their unique pedagogical practices and announce a joint immersive performance class as part of the ART WEEK | Workshop Series. With this project, they will inaugurate a brand-new pedagogical campus at C32performingartsworkspace in Venice, Italy, situated in the heart of Parco del Contemporaneo at Forte Marghera, a historical park facing the western bank of the Venice lagoon. A final public sharing of the workshop will be presented on Tuesday, June 6.

Photographs © Lorenza Cini 2017
LA POCHA NOSTRA is an ever growing cross-disciplinary arts organization and non-profit based in San Francisco, California with branches in Central and South America, Europe, Asia and the South Pacific. La Pocha Nostra was founded in 1993 by Guillermo Gomez-Peña, Roberto Sifuentes, Michèle Ceballos Michot and Nola Mariano in Los Angeles. The goal was to formalise conceptually Gomez-Peña's collaborations with other performance artists. Current core members of La Pocha Nostra include Guillermo Gómez-Peña, Michèle Ceballos Michot, Saul Garcia Lopez, Balitronica Gómez, Emma Tramposch, and Nayla Altamirano. The troupe's projects range from performance solos and duets to large scale multi-sensory performance installations involving photo, video, sound and projection. If there is a common denominator, it is their desire to cross and erase dangerous borders including those between art and politics, art practice and theory, artist and spectator - ultimately to dissolve borders and myths of purity whether they be specific to culture, ethnicity, gender or language. | www.pochanostra.com
VESTANDPAGE Verena Stenke and Andrea Pagnes have been working together since 2006 as VestAndPage, creating live performances, performance-based films, performance visuals, and poetic writings since over a decade, exploring performance art as phenomena through their collaborative creative practice, as well as through theoretical artistic research and curatorial projects. VestAndPage's art practice is contextual and situation-responsive, conceived psycho-geographically in response to social contexts, natural surroundings, historical sites and architectures. In a "Poetics of Relations" they examine notions of temporalities, memory strata, communication and fragility of the individual and the collective within social and environmental spheres, applying the themes of trust in change, endurance, union, pain sublimation and risk-taking with a poetic bodily approach to art practice and a focus on universal human experiences. While encompassing a range of subtly different concepts, they primarily express VestAndPage's view on reality while adding or revealing poetic elements as a rebellion against the exercise of power and discrimination among human beings. | www.vest-and-page.de
VENICE INTERNATIONAL PERFORMANCE ART WEEK Conceived and initiated by VestAndPage, the VENICE INTERNATIONAL PERFORMANCE ART WEEK, is the international live art exhibition project taking place in 2012, 2014 and 2016 at historical Venetian premises. The Trilogy of the Body has extensively presented historic pioneer works on exhibit in conjunction with live programs of durational performances, showing over 120 international artists, as well as the ongoing Learning Program, coordinated in 2017 by Francesca Carol Rolla, and realised in collaboration with Live Arts Cultures and international partners. www.veniceperformanceart.org

The ART WEEK | SUMMER CLASS 2017 has been kindly supported by NOVALIS and DINING ROOM.